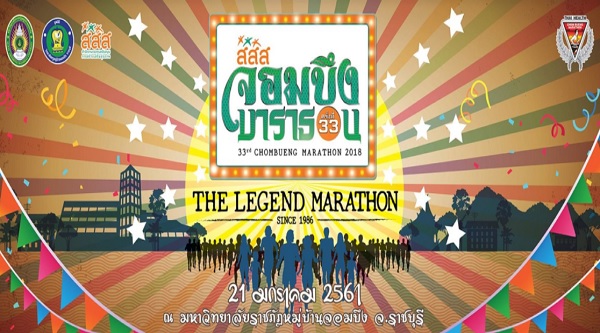 The The Marathon, Half marathon and Mini marathon will be held on Sunday 21st January 2018 at Muban Chombueng Rajabhat University.

About Chombueng Marathon
Chombueng Marathon has been accepted by health-concerned runners across the country. The event was initiated in 1985 by a group of instructors of Chombueng Village Institute as they had particular interest in running for health, with Acharn Narong Tiammek and Acharn Somjit Sangapun as the initiators. At that time, there were less than 100 participants. The registration fee was 20 baht per person. Numbers of running were made from raw cotton and were written with oil colors.

The running distance was 10 km., starting at Khao Bin Cave and ending at Jom Pol Cave. From that day on, the small running event in Chombueng was held regularly in the third week of January until it has become a tradition of Chombueng inhabitants as well as runners for health all over the country as per the remarks stated that “Those who have never run at Chombueng, they are not genuine runners.” Since 1992 on, numbers of participants increased more than 5,000 every year, and that was quite a lot that time. Then, in 1989, 21.1 km. was added to the event, and thus the name of the event was changed to “Chombueng Half Marathon.”

In 1999, the year that H.M. the King reached 72 years of age, the race committee determined another new race distance at 42.195 km. which led to the name revision as “Chombueng Marathon”, which has been called up until present.

A large number of runners regard Chombueng Marathon as the prototype of running race, because its party among athletes on Saturday evening before the race on the next day. Because a lot of runners have to travel there and stay overnight, and are not convenient to go out for dinner, the mentioned party impress everyone joining the event.

Event Regulations
The regulations of the event that all candidates must accept and comply are elucidated as per below:

– The event will comply with all domestic laws and regulations.
– The race rules, race regulations and entry regulations are also embraced.
– The organizer SHALL NOT take responsibilities of any damages caused by the following determinants:
– Illness or accidents (Physicians, nurses, volunteers, and staff are prepared in case of emergencies)
– Loss or damages of personal property.
= Uncontrollable delays of the race.
– To ensure the security of the event, the organizer will set up the management along with suitable regulations over the race area.
– Runners are required to follow the instructions of the organizer and referees strictly, otherwise they might be disqualified from the race.
– Runners must check and pay attention to announcements from the organizer both before and during the race.
– Photos, vedio/voices records, articles, and race statistics are all reserved under the right of the organizer. They are possibly publicized and broadcasted to media such as newspapers, the internet, TVs, magazines, ect. Runners can make use of their photos, vedio/voices records without permission. However, all photos and vedio/voices records of the event as well as the race are absolutely prohibited for commercial exploitation.
– The organizer gives precedence to the privacy and the security of candidates’ personal information, and will manage it carefully.

Race Regulations
The organizer does not allow runners to run on the race course if they break the rules, laws, and relevant orders. In case participants do not follow these disciplines, they might be disqualified or forbidden to join the race.

– Runners must arrive at the start line before the time, according to their registered distance.
– Runners must enter the release block following expected time groups identified when registering. The block code will be shown on bib number. If runners do not follow this instruction, it shall be considered as violating the rules.
– Runners must start running according to their registered start time. Starting after 15 minutes shall be considered violating the rules, and participants shall be disqualified from the race.
– Bib numbers must be adhered to runners’ chests so that they can be seen clearly. Runners without bib numbers presented are not allowed.
– Runners must run along the race course (following the arrows, ribbons, and signs/direction symbols). Do not use shortcuts.
– Assistance to runners can be done at water station only. Runners are not allowed to have followers or assistance on course.
– Do not dress or carry any devices that can harm other runners.
– Do not dress inappropriately as it might cause uncomfortable feelings to other runners or spectators. Impolite or obscene outfits; showing political attitudes; disparaging religions or beliefs; advertising products; or disseminating propagandas, for instance.
– Do not use equipment/devices or sounds that make others misunderstood that they starting signal.
– Do not perform any actions that bring about delays of the race or obstruct runners to reach the finish line.
– Stop or give a way to emergency vehicles or staff.
– Follow instructions of referree and marshall strictly.
– The judgment of the race is grounded on Gun Time System (Time from the center clock of the race) following the rank signs distributed by referee. Electronic chips are used for timing and examining passing of check points.
– Runners receiving awards must present their ID cards, any official cards issued by government agencies with id numbers and photos, or passports in order to obtain awards before deadlines; otherwise, they shall be disqualified from the receipt of awards.
– Other unidentified rules shall refer to those regulated by A.A.T.
– The judge’s opinion is considered final.

– Each candidate can register only one application. The use of others’ names and personal information on behalf of candidates themselves is also prohibited.
– Any false information or document forgery for the registration is absolutely prohibited.
– Candidates are not allowed to edit/revise registration information after confirmation. Therefore, please check the information thoroughly.
– Some types of computers, laptops, tablets, mobile phones, and their operating systems might cause errors to candidates’ registration. The organizer is unable to be responsible for functions of all devices and shall not be accountable for any delays arisen from internet connections that may occur .
– If numbers of candidates are more than the announced quota, e-sampling results shall be notified via email on 4th September 2017.
– The organizer will not take responsibilities for incorrect emails and non-receipt of email concerning e-sampling results. It is the duty of candidates to check their inboxes or the website.
– As there are a large number of candidates, the organizer is unable to answer individuals about the status or results of the registration.
– Selected candidates from e-sampling must settle the payment of the registration within the deadline (7th September 2017), otherwise they shall be deemed as waiving the right to join the race.
– Candidates who grant their right to others as their representatives will be disqualified from the registration next year. And candidates who use running numbers of others do not have the right to get awards.
– To authorize others to pick-up race kit on behalf of candidates themselves, ID card copies/passport copies of subjected candidates must be presented. ID Numbers or –
Passport Numbers in those official documents must match the registered ones.
– No race kit pick up on race day.
– The organizer reserves the right not to refund registration fees in case of cancellation or adjournment of the race due to uncontrollable factors or disasters.