Since the first edition of the Neujahrsmarathon 15 years ago with 150 runners we have grown into a internationally established race with more than 1000 participants from over 50 nations and all continents.

Whether running the marathon, half-marathon, 10k, Team Run or Kids Run (free participation for all kids 3-14 of age), the Neujahrsmarathon is a great place for a memorable beginning of the new year in the firework lit night sky. Due to limited capacity, the bibs for the half-marathon and 10k are limited. Come run with us into the New Year!

Also spectators, supporters, sponsors and volunteers the restaurant, speaker and DJ enjoy the entertainment inside the hall through the night.

Option to change to shorter race
Thanks to the joint start, it is explicitly allowed to switch to a shorter distance during the race and be classified on the new distance.

Start and finish
For all races inside the sports hall «Unterrohr» in Schlieren.

Illumination
The course is not illuminated. Headlamps are recommended.

Course markers
The course is marked by signposts, barrier tape and flags.

Checkpoints
In case you encounter problems, please report to the mobile checkpoints (mountain bikers) or fixed checkpoints on the track.

Time keeping
Official time keeping and data processing by Datasport. The time is measured using electronic DataChips which are fixed on the race number bibs. Chips not being returned after the race will be charged with CHF 40.–
In addition to the finish times, several intermittent times will be taken. In particular, intermediate times at kilometer 10 will be taken which will qualify for official best performances of the year. The same holds true for all marathon and half marathon performances.
In the ranking list net times will be shown.

Valuables
Valuables (keys, mobile phones, wallets; but no bags, laptops, etc.) can be left for safekeeping at the information desk. 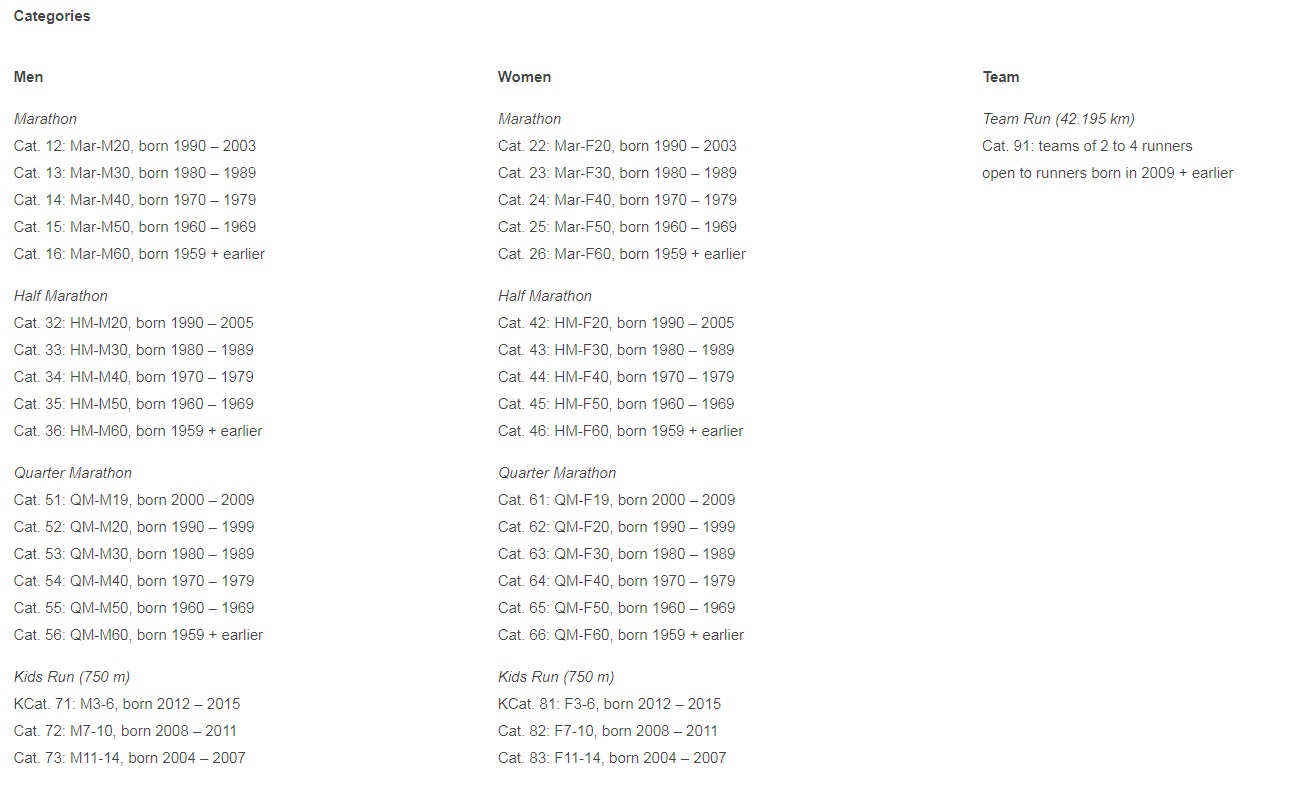 THE NUMBERS OF RUNNERS FOR THE QUARTER MARATHON AND THE HALF MARATHON ARE RESTRICTED TO 300 AND 400, RESPECTIVELY. NO SUCH RESTRICTIONS APPLY TO THE FULL MARATHON, THE TEAM RUN AND THE KIDS RUN.

Registration
Online via this link (also for the kids run).
In case of a late registration on site, a signed waiver, release and indemnification form is required.

Food, beverages
The High5 products of our food partner PowerLab will be offered every 5 kilometers. Warm carbohydrate drinks, energy bars, bananas, gel and water will be available. Additionally, Coca Cola is available every 10 kilometers.
For supporters, handing over personal beverages/food is only allowed at the official stands.

Restaurant
A restaurant will be installed in the sports hall, where meals and beverages will be available starting from 19h00.

Medical team
The medical team will be positioned in the sports hall Unterrohr.

Finisher medal
The (optional) order of the finisher medal is done together with the registration for the race. The participants of the kids run get a medal free of charge when finishing the race.

Sparkling wine
On the occasion of the festive character of the event, a sparkling wine (with Neujahrsmarathon bottle label) can be ordered when registering for the race.

Pictures
Participants can order their personal pictures on http://www.alphafoto.com. Participants will not be remunerated for pictures used by the organizers.

Ranking list
The ranking list as well as the world leading times of the year will be published on the internet.

Certificates
We offer our runners official certificates of their Neujahrsmarathon ranking as well as their ranking in the IAAF list of world leading performances as of 1 January.

Licences
There are no licences necessary. Performances of runners without a licence qualify for IAAF and national best performances of the year as well.

Insurance
Participants are responsible for providing their own insurance, including accident insurance.

Liabilities
Athletes participate at their own responsibility. The organizers deny all responsibility for accidents and claims of all kind (including theft).

Medical advice
The organizers advise all participants to prepare seriously for this competition. By registering for the race, the athletes confirm to be healthy and adequately trained for participating in the race. The organizers deny all responsibility for claims resulting from insufficient fitness or excessive physical demand. If an athlete cannot start (also with medical attestation), the entry fee will not be reimbursed.

Doping
Competitors may be tested for drugs.

Patronat
The Neujahrsmarathon Zürich takes place under the patronages and the rules of IAAF and the Swiss Athletics Association. 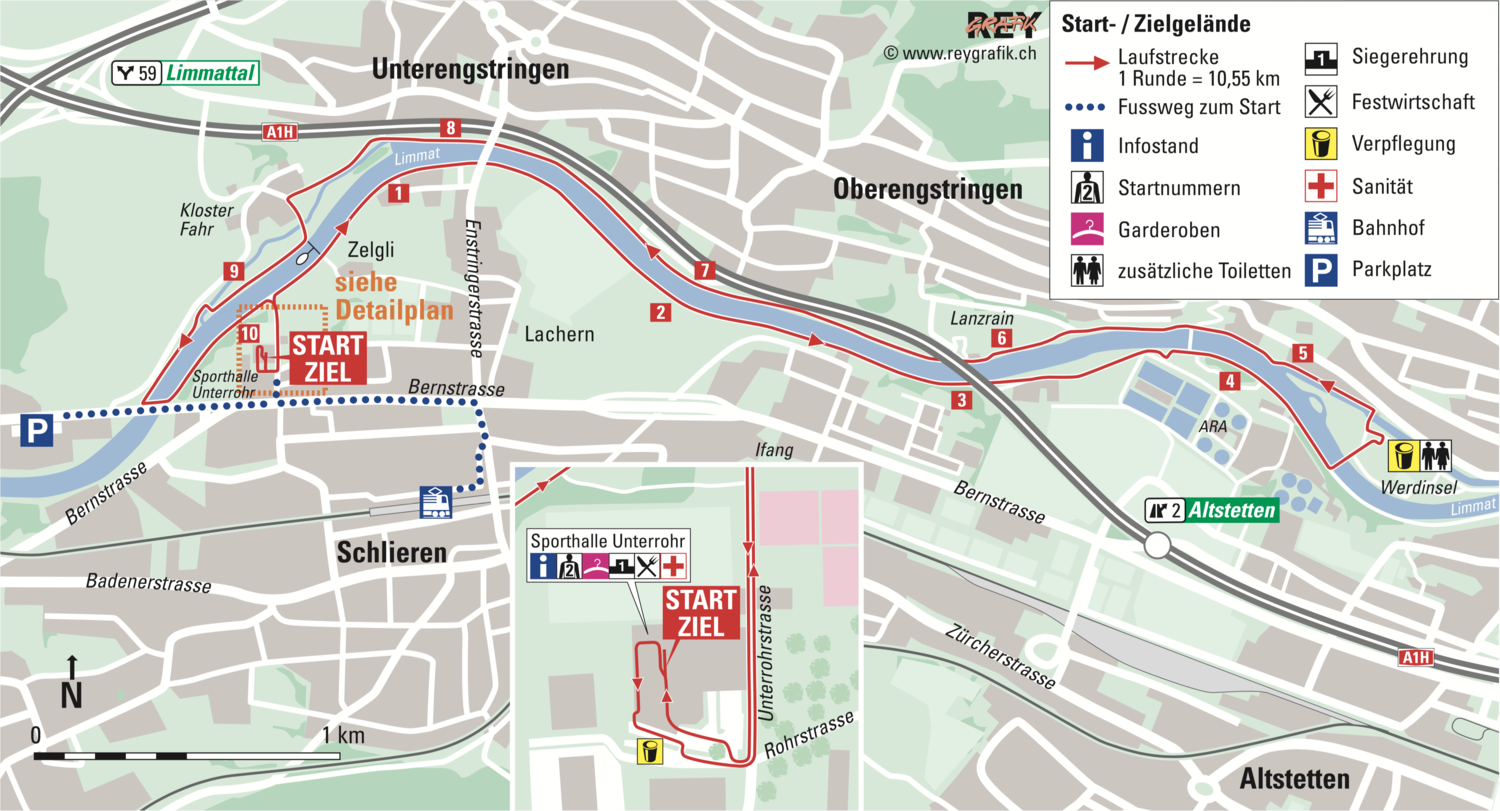 Getting there with public transportation on 31 December
From Zurich main station, trains S3/S12 take you to Schlieren (travel time 10 min; trains every 15 min). The sports hall Unterrohr is located 10 walking minutes from Schlieren station. Please find the official train schedule at http://www.sbb.ch.

Getting there back on 1 January
From Schlieren, trains SN1/S3/S12 take you back to Zurich main station. Warning: Make sure your ticket includes the ZVV night supplement (CHF 5.-).

This official parking is at 900 meters from the sports hall on the grounds of Walo Bertschinger. Travelling by public transportation is highly recommended!

GPS-address for fetching the number bibs the day before, i.e. on 30 December: Unterrohrstrasse 2, 8952 Schlieren