The Placencia Marathon & Half Marathon 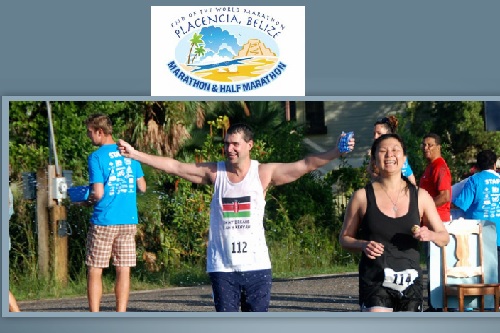 Placencia Marathon – End of the World

Join The Placencia Marathon@End of the World Marathon

Come join us for the annual End of the World Marathon in Placencia, Belize.

Come for the run and stay for the fun in a Caribbean wonderland of beautiful beaches, mystical Mayan temples, spectacular caves, pristine rain forests, and the second largest barrier reef in the world.

Why the End of the World Marathon?
The first Placencia Marathon & Half Marathon was held in December of 2012, days before the end of the Mayan Calendar on December 21, 2012. That date, often referred to as the “End of the World” was especially significant in Belize where the Mayans have lived for hundreds, if not thousands, of years.

The Mayan calendar began on a date corresponding to 3114 BC and the earliest artifacts of Mayan culture discovered in Cuello, Belize have been carbon dated to about 2600 BC.

Although the world did not end in 2012, we retained the name “End of the World Marathon” in honor of the distinguished writer Aldous Huxley, who wrote in 1934 about Belize ‘If the world had any ends, British Honduras would certainly be one of them.’

Run for charity
The End of the World Marathon is not only about running and fun in beautiful Belize.

All proceeds raised from the marathon go towards high school scholarships for children on the peninsula.

Course
The 26.2 mile marathon course begins at the football field at the bottom of the peninsula, goes through Placencia Village, Seine Bight Village, and Maya Beach, with multiple views of the Caribbean Sea along the way. The course then loops back a few miles south of Riversdale.

The 13.1 mile half marathon course begins at the marathon turnaround and both races finish in Placencia Village.

There will be water stations at about every mile. The course is completely flat.

The registration deadline is October 16, 2017. ​Runners who pay their fees after this date may participate in the event, but will not be guaranteed an official race T-shirt and finisher medal.